Moss, for me, is transformative.  If it’s under my bare feet, it takes me back to being a child, finding a cool, soft place to rest. If it’s found in the forest on a snow-less January New Year’s hike, it’s the welcome site that tells me the world around us is alive and vibrant, no matter what we may think about winter. If I get really close to moss and see the structures, I imagine myself in that miniature tropical forest. Last year, when struggling to grow plants under a heavy canopy of maples, I decided to include moss in the mix of greenery with our naturalized landscape. I had considered a pond, but knew that the shady location was going to present problems. My solution was to create a ‘moss pond’. Many gardens use moss effectively; some of the most stunning are Japanese gardens that use moss as a ground-cover. Gardeners that explore ‘Fairy Gardens’ also like to add moss to their creative miniature landscapes.

Do you consider moss a beautiful plant? Often Master Gardeners are asked about moss removal in lawns.  Homeowners are encouraged to increase drainage, improve soil fertility etc. For me, this is an opportunity – just call……and I’ll help you remove it!
Mosses belong to Bryophytes along with Liverworts & Hornworts. Mosses comprise the largest in this group with over 10 000 species (Bryophyta). They are non-vascular so they must obtain their nutrients & water from the environment, through the air.

There are two main types of moss:
1. Acrocarps – Growth is more upright: resemble cushions and have capsules at the tips of their branches (below, left).
2. Pluerocarps – Growth creeps outward, mat-like; branching freely; when inspected closely, resemble ferns (below on right). 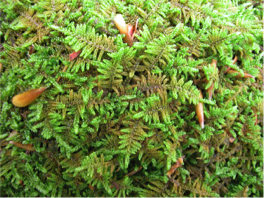 Just like ferns, mosses grow from spores. When a moss spore germinates it first develops thread-like branches called protonema, rather than true roots. The protonema push into the ground (or a surface such as a rock) to anchor the plant, which then begins to develop tiny leaves. Thousands of these plants will bunch together to make a single patch of moss.

As an important part of the forest ecosystem, moss:

AND finally, moss is a bio-indicator for pollution (in contaminated areas, it changes shape, density or disappears).

Mosses grow incredibly slowly, between 0.25 to 2.5 inches in length annually. If moss is stripped from a rock or log it can take 20 years to recover. For all of these reasons, it’s important to source moss responsibly.

Here are some suggestions to locate moss for your garden:

Acrocarps are best removed after a rainfall. First remove any debris, weeds, grass, leaves, stones etc. Using a barbecue spatula or paint scraper, remove the moss along with some of the soil underneath it. Aim for pieces the size of your hand. Pleurocarps can be collected by scooping, scraping or raking. Scooping is done in the same way as with Acrocarps. Scraping is done by hand, gently tearing and pulling, while scraping as it loosens. Make sure to get some of the soil with the moss. I have read that raking is best done when the moss is dry but have not tried this method. You will only get small fragments, without any soil, however with some TLC (watering, pressing moss into the surface) in the new site they should begin to grow. Moss milkshakes are said to be another option, but I have not attempted this. (You may want to read this first.)

Prepare your site. Choose a shaded area, ideally with slightly acidic soil (5.0-6.0). Do not plan to place your moss in a play area. While moss will withstand foot traffic it would easily tear apart with high activity. Prepare the area, creating a smooth, moist surface, removing any debris. Scratch the surface lightly. Place your moss in patches, to grow outwards into each other (like a patchwork quilt). Gently step on the moss, and then moisten it using a fine spray. (Repeat this process frequently, sometimes twice a day). Frequent watering will allow the moss to become established more quickly, gradually decreasing watering as it takes hold. This process can take months! Moss can withstand drought once established, but not before. Watering/misting may need to take place more frequently during hot weather. Placing a water feature close by can be helpful by increasing the humidity in the area. In addition, you may need to inspect the area frequently as birds seemed to enjoy upending moss, looking for insects. I also worked to keep the area clear of any debris that might mat on the surface (leaves), which would prevent the moss’ ability to gather nutrients.